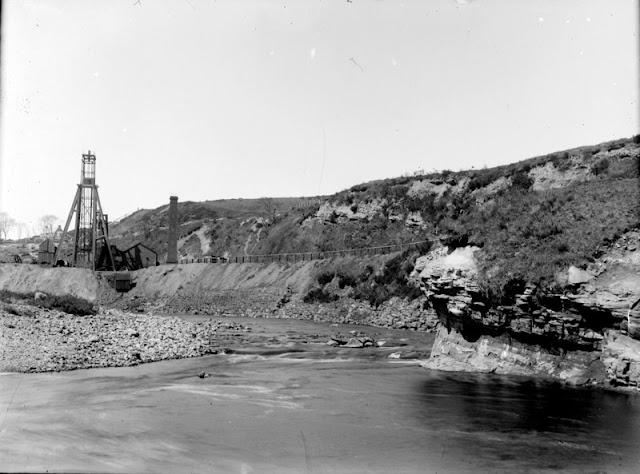 Brora coal-pit, 0.8 km. west of Brora. Sutherland. Coal-pit and rock exposures (lower part of the Jurassic Corallian and Oxford Clay). The photograph shows the small colliery workings with a row of cottages to the right. The main seam of the Brora Coal was c. 3 feet 6 inches thick within which was a band of pyrites. This greatly reduced its value. Most coal in Scotland is derived from Carboniferous strata, the Brora Coal is unusual in that it is of much younger Jurassic age. The coal had a strong sulphurous odour, was liable to spontaneous combustion both in the mine and on the spoil heaps or even in transit and it had a high ash content. The history of mining of this coal dates back to 1598 when Jane, Countess of Sutherland opened the first pit. Many other records of mining exist since then. In 1910 output was 6000 tons. The coal raised was used in the immediate neigbourhood, at the brickworks adjacent to the mine, in the Brora Wool Mill which also supplied Brora with electric light and the local inhabitants used it as a domestic fuel.

Posted by Bob McIntosh
Posted by scotfot at 17:37 No comments:


Oblique aerial view of Craigielaw Point, Aberlady. East Lothian. Looking north-west. Bedded sediments. Lower Limestone Group. The Lower Limestone Group is the uppermost division of the Lower Carboniferous in the district. The strata has a regional dip to the west or north-west of up to 5 degrees, though between Craigielaw Point and Aberlady Point gentle minor folds are superimposed on the larger structure. Note the concrete anti-landing defences from World War 2.

Posted by Bob McIntosh
Posted by scotfot at 21:30 No comments: