The genus Cardioceras belongs to the Subfamily Cardioceratinae. This specimen is from Brora, an important and well known Jurassic outcrop in East Sutherland. It is Callovian in age, which is the lowest division of the Upper Jurassic, a period marked by a marine transgression. British Geological Survey Biostratigraphy Collection number GSE 10338. Green Spot. Cardioceras is an ammonite with a moderately compressed shell, with a large outer whorl that becomes smooth. It has a strong keel and well differentiated ribs. The Cardioceratinae comprises four important genera, Quenstedtoceras, Goliathiceras, Cardioceras and Amoeboceras, they succeed each other stratigraphically with little overlap. Figd. W.J. Arkell, Mon. Pal. Soc. Vol. XCVI, 1943, pt VIII, pl LIII, fig 7; Figd. N.W. Hylland, Regional Handbook, pl XII, fig. 8.

The exoskeleton of Acernaspis can clearly be seen. It has a central axis and two side regions called pleurae. It is separated from anterior to posterior into a cephalon or head-shield, a thorax and a pygidium or tail-shield. The central region of the cephalon is called the glabella. Note the compound convex eye (like a fly's) made up of a number of separate lenses. This would give them a wide field of view forwards, backwards, sideways and upwards. The trilobites are the earliest of the arthropods. First found in rocks of Lower Cambrian age, they died out in the Permian. Throughout their 350 million year history they maintained a remarkable constancy of form, though with many varieties. All trilobites were marine. Figd. Clarkson, Elderidge, & Henry, pal. 20,plate 19, figs. 12,13.

BGS are involved in the 'GB3D Type Fossils Online project' where a large number of fossil images will be made available on the web including 3D images!

The sandstone is fine-grained with a speckled appearance due to the presence of abundant small dark grains of iron oxide. This specimen is of Carboniferous age. British Geological Survey Petrology Collection sample number MC6198. It contains parallel bedding laminae defined by thin dark surfaces of mica and iron oxide, and distinctive red-brown banding which represents iron oxidation fronts where iron oxides in the sandstone have undergone alteration and oxidation to form vivid colours. These fronts are generally parallel to bedding, but in some places they cut across it. Such thinly-bedded sandstones were historically used for paving, they could be easily split into regular thin sizes. Quarries such as Hailes in Edinburgh provided much paving in the past for that city. Nowadays with the old quarries now infilled, stones like this from Slaley are available for repair and restoration work. Size of specimen: 10x10x7 cm. Munsell colour code and colour N8 to 10YR7/2, variable from very light grey to pale orange.

BGS have over 4300 images from the National Building Stone Collection online in the Geoscenic image resource. They can be browsed either by rock type/place or place/rock type.
Posted by scotfot at 21:53 No comments:

A newspaper article which covered the opening of the HQ in 1956 reported that "Mr W H Reeve, Director of the Geological Survey, said the department now had, for the first time, many facilities of educational value, including an ore museum, a scientific and technical reference library, new laboratories and a drawing office."

The Tar River Estate House on 17th September 1996 with a dome-collapse pyroclastic flow passing behind down the Tar River valley. This dome collapse continued for more than nine hours. A large part of the dome collapsed on 17th September and this caused a rapid reduction in pressure over the vent at the summit of the volcano. As a result, shortly before midnight, there was a magmatic explosion during which blocks of lava 1.5 m. in diameter were blasted 2.1 km. from the dome. The ongoing eruption of the Soufriere Hills Volcano has devastated much of the small Caribbean island of Montserrat. The eruption of the lava dome-building volcano began in 1995 and volcanic hazards have included pyroclastic flows, pyroclastic surges, vulcanian explosions, lateral blasts, ash clouds and lahars.

BGS hold an extensive photographic archive of the volcanic activity on Montserrat. 23,000 images are available on Geoscenic, the BGS online image service.

Bob McIntosh
Posted by scotfot at 18:39 No comments:

﻿﻿﻿This poster was found in the back of a scrapbook that belonged to Roderick Murchison (1792-1871) who was Director of the Geological Survey of Great Britain, 1855-1871. The Cuvier referred to is Jean Léopold Nicolas Frédéric Cuvier (1769-1832), generally known as Georges Cuvier. He was a comparative anatomist, zoologist, geologist and vertebrate palaeontologist and a proponent of catastrophism.

This is one of a series of photographs taken July to September 1892 that gave rise to the Monti Silvestri crater row. 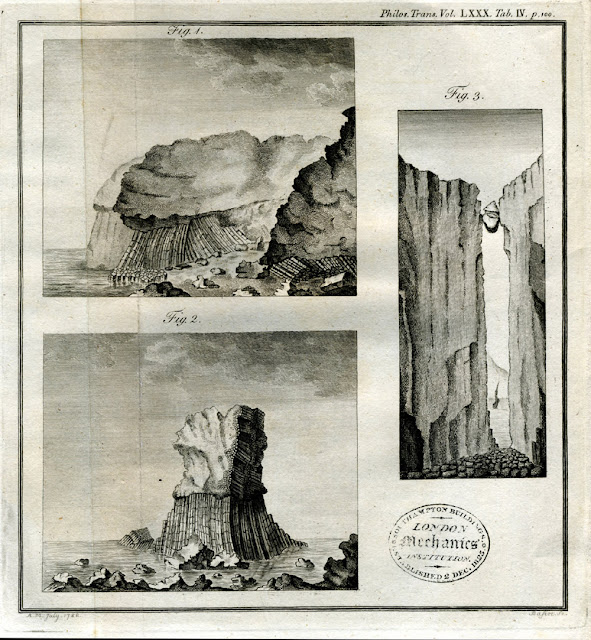 From: Some account of the Strata and Volcanic Appearances in the North of Ireland and Western Isles of Scotland. In two letters from Abraham Mills Esq. to John Lloyd, Esq. F.R.S. Read January 21, 1790. Published in Phil. Trans. Vol LXXX.
Posted by scotfot at 10:19 No comments: